Do you have any idea how much sugar you consume every day?

Do you have any idea how much sugar you consume every day?

The Western diet is associated with increased rates of obesity, diabetes, heart disease, hypertension, and cancer, yet the conventional paradigm is extremely reluctant to accept that it is the sugar content of this diet that is the primary culprit! Doctors and health officials alike are still trying to make you think that you can have your cake and eat it too, as long as it’s in moderation.

The point is, it is impossible to eat a diet consisting primarily of processed foods and stay within the bounds of moderation!

Cutting out a few desserts will barely make a dent if you’re eating a “standard American diet.” In fact, various foods and beverages contain far more sugar than a glazed doughnut. Take Vitamin Water, for example. One 20 oz. bottle contains 33 grams of sugar, which equates to THREE Krispy Kreme glazed doughnuts! Another common lunch staple for many kids is Oscar Mayer Lunchables, but just one box of crackers with processed turkey and American cheese contains 36 grams of sugar. It’s like sending them off to school with three-and-a-half doughnuts.

Unfortunately, the Institute of Medicine (IOM) still has not been able to come up with any sort of guidelines on sugar consumption. They acknowledge that there’s plenty of research incriminating sugar in increasing disease rates, but they have yet to nail down any recommendations for upper limits.

If you look at historical data, back in the 1700’s, the average person consumed a mere 4 pounds of sugar per year. By the 1800’s it had increased to about 18 pounds a year. The primary difference is that they didn’t have processed foods back then, so you didn’t get 36 grams of added HFCS in your cracker and cheese lunch.

Hence, the answer the sugar over-consumption dilemma should be obvious, but I’ll spell it out anyway: Return to a diet of natural, whole foods and avoid all processed foods and sweetened beverages!

Sugar Turns to Fat and Destroys Your Health:

For example, chronically inflamed blood vessels lead to heart attacks and strokes, and a good deal of evidence exists that many cancers are caused by chronic inflammation.

There are more than 3,500 articles showing a strong relationship between uric acid and obesity, heart disease, hypertension, stroke, kidney disease, and other conditions. In fact, a number of studies have confirmed that people with elevated serum uric acid are at risk for high blood pressure, even if they otherwise appear to be perfectly healthy.

For pregnant women, even preeclampsia

This is why I am so passionate about educating you about the dangers of sugar, particularly fructose! I am thoroughly convinced it’s one of the leading causes of disease and needless suffering from poor health and premature death.

Sugar and especially fructose, leads to insulin resistance, which is not only an underlying factor of type 2 diabetes and heart disease, but also many cancers. Researchers from the World Health Organization’s International Agency for Research on Cancer have reported that those who are obese and/or diabetic are at greater risk of cancer.

They trick your body into gaining weight by fooling your metabolism, as it turns off your body’s appetite-control system. Fructose does not appropriately stimulate insulin, which in turn does not suppress ghrelin (the “hunger hormone”) and doesn’t stimulate leptin (the “satiety hormone”), which together result in your eating more and developing insulin resistance.

Fructose metabolism is very similar to ethanol metabolism, which has a multitude of toxic effects, including NAFLD (non-alcoholic fatty liver disease). It’s alcohol without the buzz.

Sugar is linked to Cancer:

The factor that links obesity, diabetes, and cancer is insulin resistance.

According to Lewis Cantley, director of the Cancer Center at Beth Israel Deaconess Medical Center at Harvard Medical School, as much as 80 percent of all cancers are “driven by either mutations or environmental factors that work to enhance or mimic the effect of insulin on the incipient tumor cells,” Gary Taubes reports:

“As it was explained to me by Craig Thompson, who has done much of this research and is now president of Memorial Sloan-Kettering Cancer Center in New York, the cells of many human cancers come to depend on insulin to provide the fuel (blood sugar) and materials they need to grow and multiply. Insulin and insulin-like growth factor (and related growth factors) also provide the signal, in effect, to do it.

Some cancers develop mutations that serve the purpose of increasing the influence of insulin on the cell; others take advantage of the elevated insulin levels that are common to metabolic syndrome, obesity and type 2 diabetes. The more insulin, the better cancers thrive.

Thompson believes that many pre-cancerous cells would never acquire the mutations that turn them into malignant tumors if they weren’t being driven by insulin to take up more blood sugar and metabolize it.”

Some cancer centers, such as the Cancer Centers of America, have fully embraced this knowledge and place their patients on strict low-sugar, low-grain diets. But conventional medicine in general has been woefully lax when it comes to highlighting the health dangers of this additive.

It’s quite clear that if you want to avoid cancer, or are currently undergoing cancer treatment, you absolutely MUST avoid all forms of sugar!

Not All Calories are Created Equal:

As described in Taube’s brilliant New York Times article, a calorie from glucose, such a potato or bread, is vastly different from a calorie from sugar (which is a 50/50 mix of glucose and fructose, or in the case of high fructose corn syrup, a 45/55 mix.) This is because they are metabolized differently and affect your body in different ways.

Fructose (whether from regular sugar of HFCS) is metabolized primarily by your liver; where glucose is metabolized in every cell of your body. Making matters worse, when you consume fructose in liquid form, such as soda, the effect is faster and also magnified.

Your liver converts the majority of this fructose into FAT.

Additionally, since all sugars raise your insulin levels, you eventually end up with insulin resistance. In response, your pancreas starts releasing higher amounts of insulin in an effort to curb your rising blood sugar levels. Eventually, your pancreas loses the battle; your blood sugar levels keep rising, and you end up with full-blown diabetes. 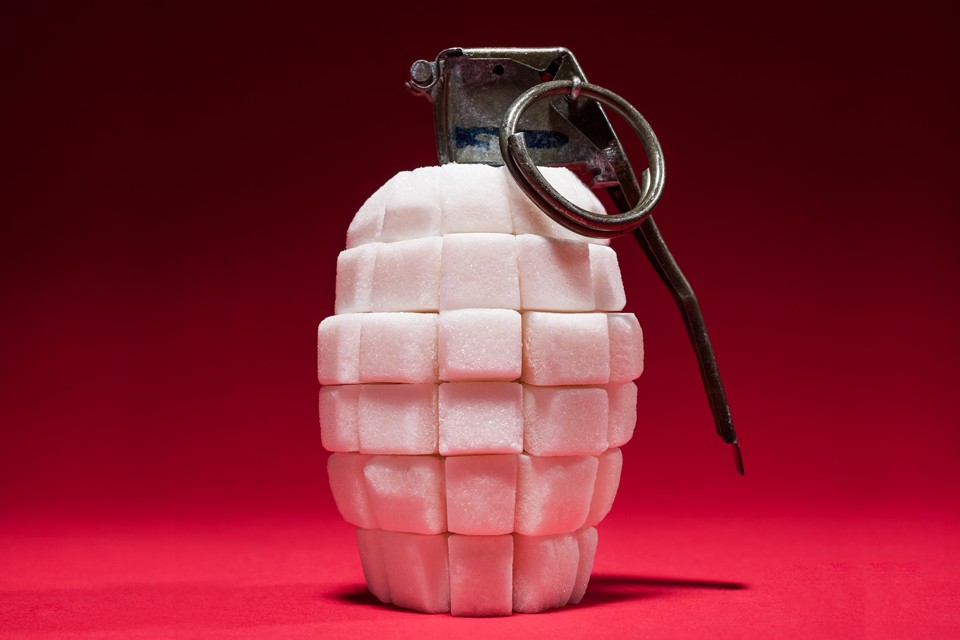